2AM. Awaken by the itching of my overly sensitive skin. Tried to fall back to sleep, alas, all efforts were in vain.

3AM, defeated, I biked to the nearest McDonald’s to grab a quick meal; the meal was nothing more than just a cheap chicken sandwich and a cup of green tea. I wanted nothing more than something that would make my stomach shut up, as having anything more than that would probably screw up my sleeping even more. The place was relatively empty, with only a group of people sitting at the tables. While waiting for my meal, I noticed a curious being wandering outside. It was a feral cat – a skinny one at that. 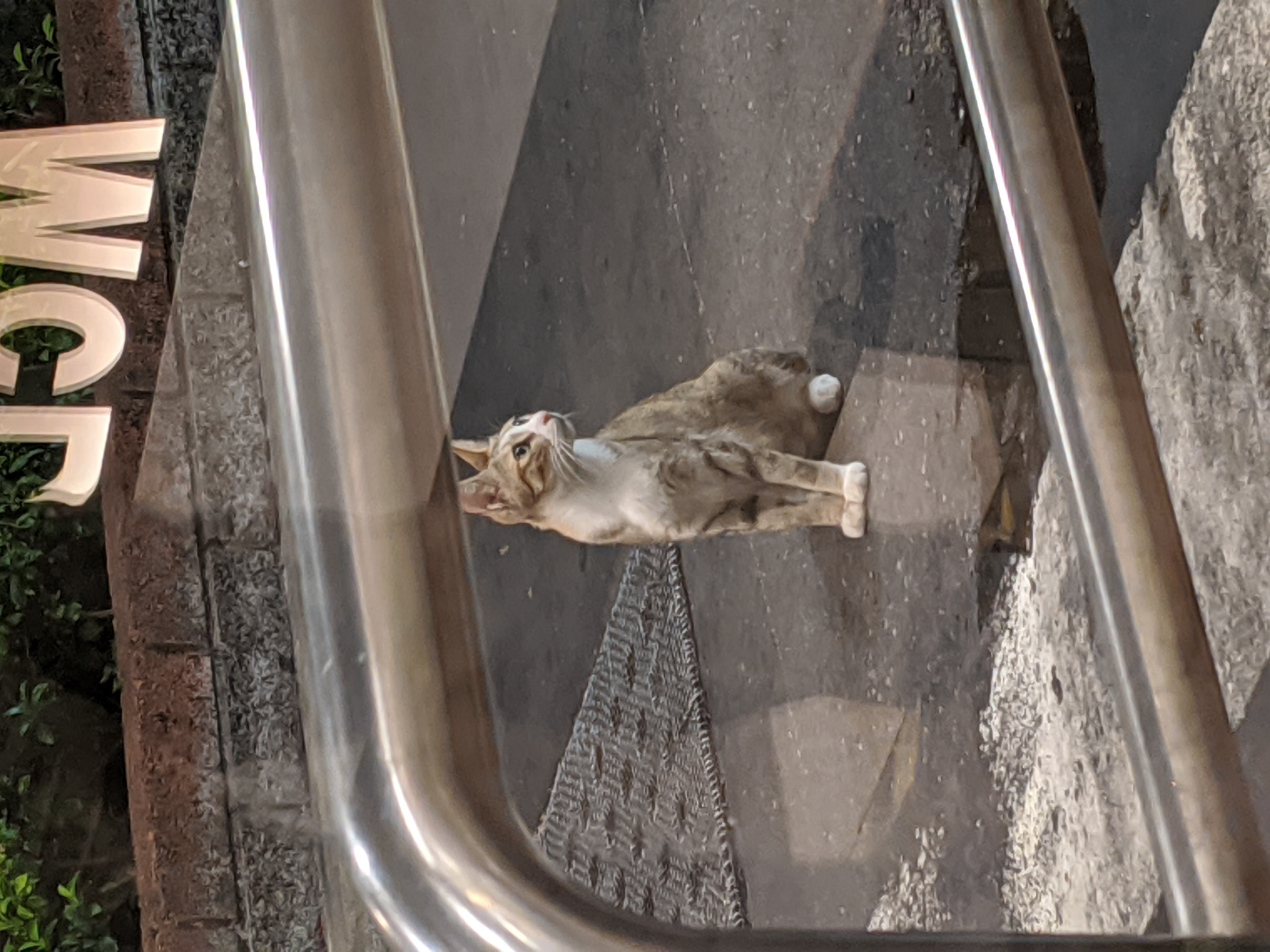 The food was ready.

I grabbed my tray of food and seated near the front door. The cat was still wandering around outside and began making its way to the drive-thru. What separated us was a mere thin plane of glass. I kept my eyes on the frail kitty while I had my shoddily made chicken sandwich combo. The cat noticed me and looked at me a few times, but ultimately decided to stroll its way back to the side of the drive-thru. 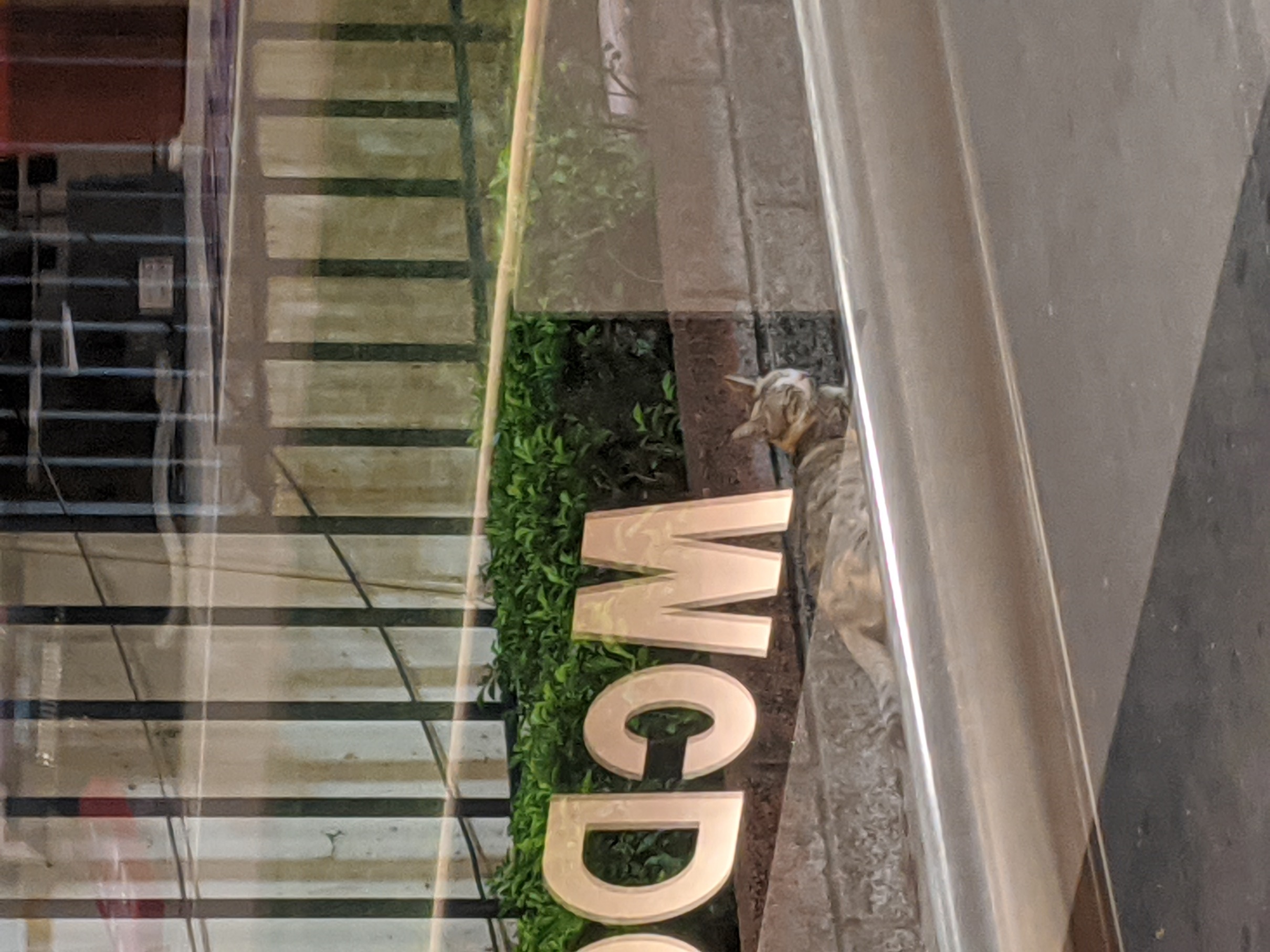 It seemed like ages ago when it had its last meal.

As I finished my meal and dumped the remaining of the tray, I decided to go take a good look at this cat. The cat was obviously scared when I approached it, but I carefully sat across from the feral. It looked at me for a few moments, meowed at me multiple times, as if it were crying for food – it ultimately gave up and sat back down. The face of the kitty was, for the lack of a better word, lethargic. At first, I thought the employees must have had fed it at some point; otherwise, it wouldn’t be looking at the drive-thru window and constantly meowing at it. I waited for a few moments to see if anyone would take care of the crying kitty – unfortunately, it seemed that the employees weren’t too interested in dealing with it. 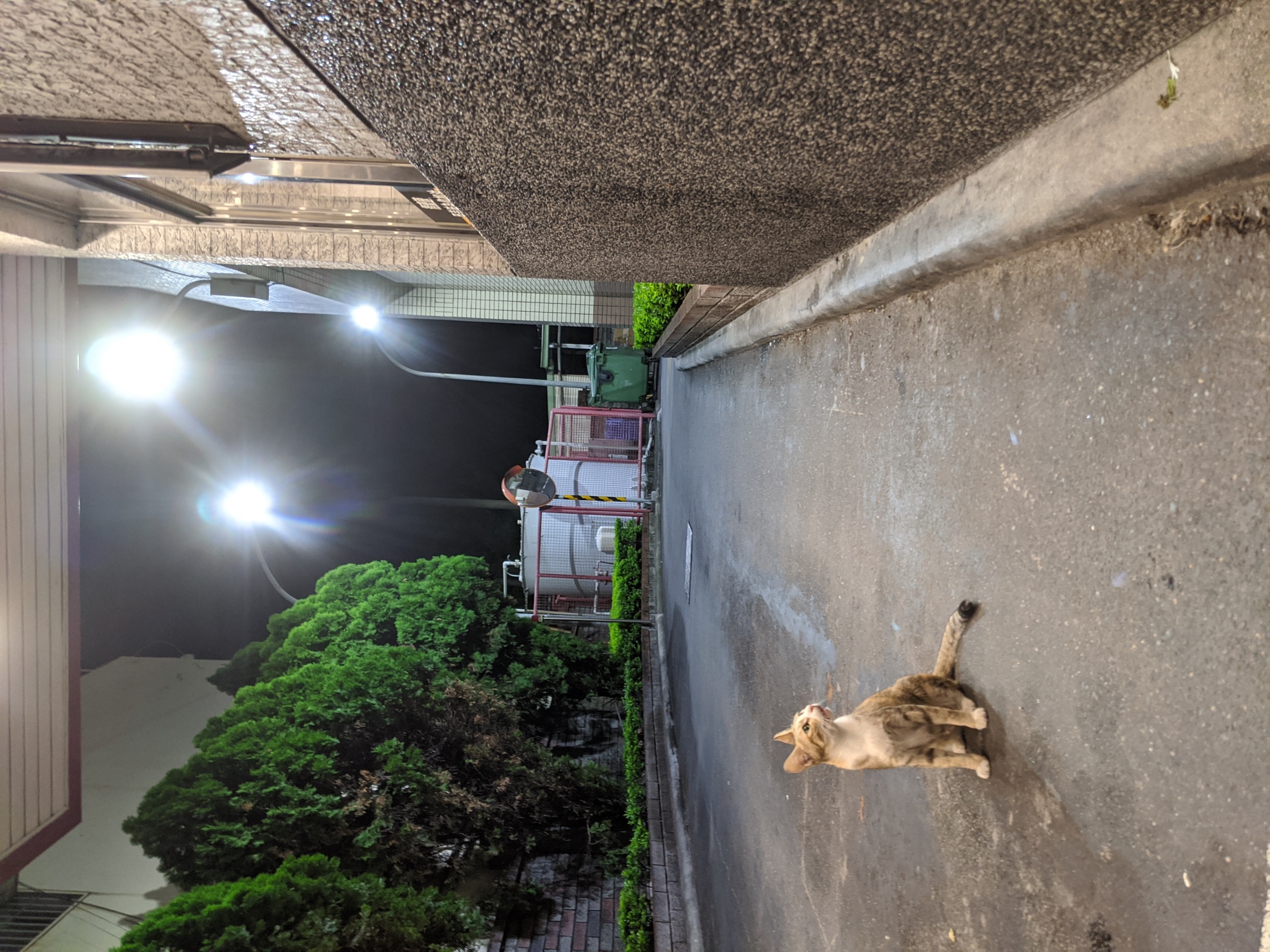 As I stood up, the cat looked at me, concerned that I was going to do something terrible to it, then sat back down once I left the scene. I biked to the nearest 7-11, spent a minute or two looking around the isles for pet foods. Once I finally located the aisle, I was a bit concerned at first – there were only canned dog foods. I asked my friends on Discord to see if they think it was okay for the cat to have the canned meat, and they asked me if there were anything else. I looked around and found what looked like cat treats. It turns out the treat was some sort of wet cat treat with tuna in it. “Eh, it’s the safest bet, screw it. I’ll get this thing then,” I thought to myself. It cost like TWD 99 (~3 USD), which was kinda outside of what I was expecting to spend, but it’s whatever if it makes the cat feel better. 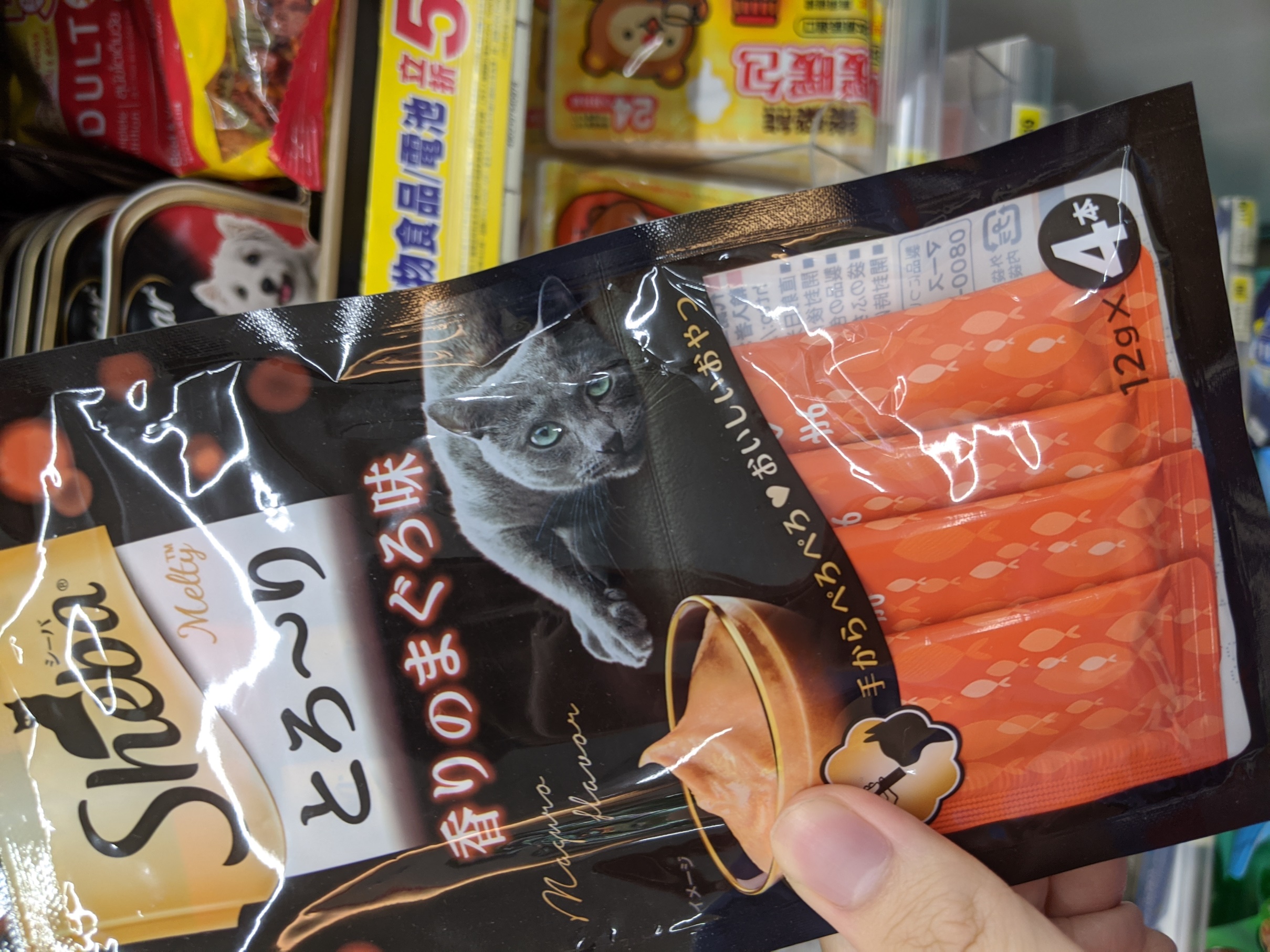 I came back to the scene, relieved that the cat was still there. I sat back down and opened up a pack, squeezed out the content on the paving. The cat quickly rushed its way over to the food and devoured the whole… lump of food within seconds. It meowed way louder than before at me as if it was asking for more. 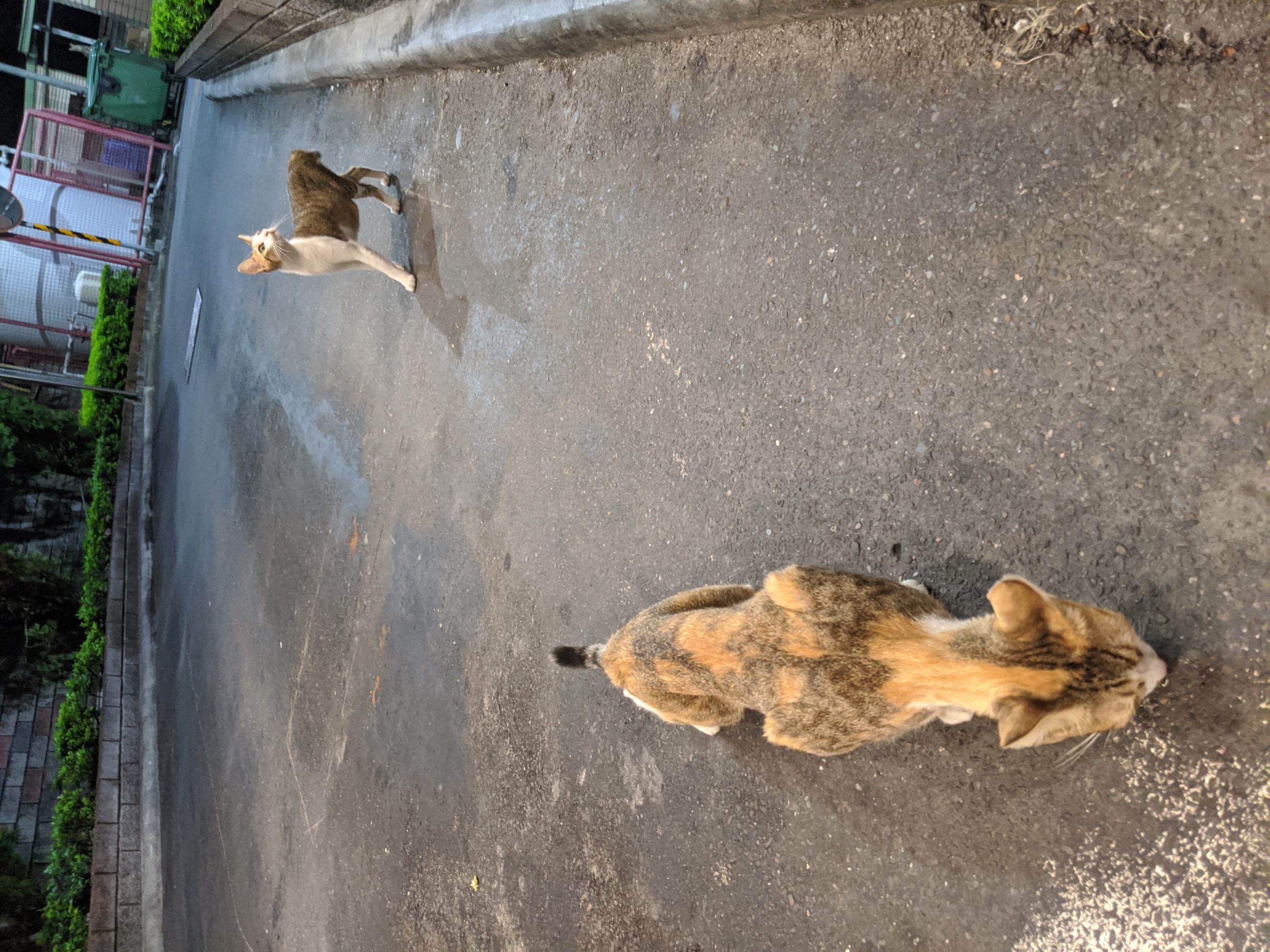 Good god, when was the last time this little guy ate?

That’s when I noticed that it wasn’t a little guy; no, the little kitty was a girl. Damn, I hope she hasn’t had any kids yet. Anyways, I squeezed out one more tube onto the ground, and that’s when one of the employees walked out and noticed me feeding the cat. “It’s probably better that you don’t,” the clerk awkwardly says. “They poop a lot.” I couldn’t help but burst out a laugh. It seemed like such a silly reason, but unfortunately, the guy was relatively serious. “We’ve been dealing with cat feces a lot in the back, so yeah.” Welp, this is awkward. “Okay, sorry, and thanks,” I replied back, embarrassingly. After that awkward encounter, I decided to lure the cat away from the fast-food chain. I lured it to a nearby building and fed this poor cat one more tube. I sat there with the cat for 10 more minutes. I left the scene with 7 more extras in the bag. I guess I’ll keep them in my bag for now in case I encounter more in the future.

But was what I was doing wrong?

I don’t know. Even 3 hours later, blogging this out, I still wasn’t sure if I did the right thing. I couldn’t have just left the poor thing to starve, especially being a cat person and all. Yet, all the evidence online seemed to suggest that feeding the feral is not a good move, especially not knowing if the animal was neutered or not. I can see the other side of the argument, but it just feels morally wrong to leave the cat out and about. I wish I could adopt the poor thing. My friends assured me that I did the right thing. The cat gets to see another day through – but I don’t know for how much longer. I worry about its wellbeing and felt morally off after the encounter with the guy. I hope I did the right thing.

You may also enjoy

Impact of lockdown in Taiwan and my personal life.